Home > The Latona fountain > HISTORY OF THE LATONA FOUNTAIN

HISTORY OF THE LATONA FOUNTAIN

​​
The origins of the fountain: the Frogs fountain

The first stage of the construction, which lasted over 20 years, saw the installation of pipes under the basin to supply the first water features inaugurated in 1666: around a central spout were six small ‘bubbling’ features, while twenty jets were installed around the edge. At the same time, the two small ponds of the parterre were dug out.

The following year, in 1667, the Marsy brothers were commissioned to carve animal figures to decorate the Oval fountain and its parterre. Gaspard (1624 - 1681) and Balthazar (1628 - 1674) Marsy then took on a series of commissions for almost all the sculptures of the fountain. They also produced some of the other outstanding sculptures of the Garden, including one of the four fountains of the Seasons (Bacchus), the bronze giant Encelade for the grove named after it, and one of the groups of the Horses of the Sun.

These animal figures gave the fountain, for a few years, the name of the Frogs fountain. Installed over the twenty jets around the edge, twenty frogs cast in lead spouted water towards the centre of the basin. Twenty-four turtles and lizards decorated the two ponds of the parterre. 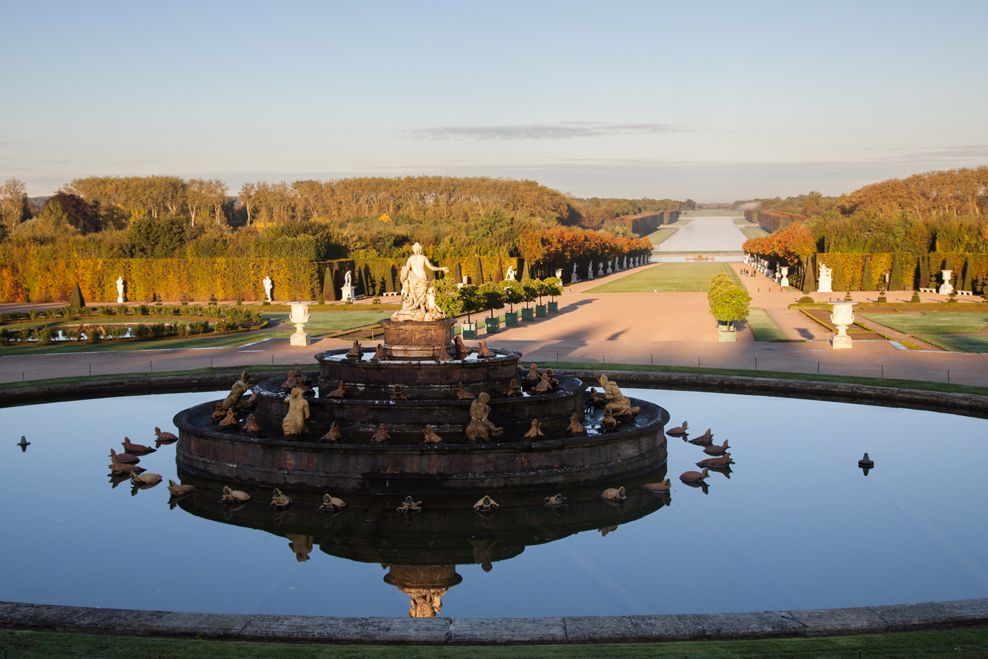 The Latona fountain, in the centre of the garden of Versailles © EPV / Thomas Garnier
A fountain for the mother of Apollo

In 1668, the decision was made to make this Frogs fountain one of the highlights of the myth of Apollo decorating the Garden to the glory of the Sun King. The fountain was dedicated to the legend of Latona, mother of Apollo and Diana, and depicted her encounter with the peasants of Lycia. During this episode told by Ovid in his Metamorphoses, Latona punished the peasants who had insulted her by having them changed into frogs.

The Marsy brothers were given a new commission for sculptures. Balthazar, the younger one, executed six lead figures of peasants. Half-human and half-frog, they are depicted at more or less advanced stages of their metamorphosis and were installed in 1669 on the six pre-existing bubbling features. Gaspard, the elder brother, executed the marble sculpture group of Latona and her Children. This group was installed in 1670 in the centre of the basin.

Illustrated by Jean Le Pautre (1618 - 1682) in an engraving dating from 1678, this first Latona fountain was quite different from its definitive version. Latona was indeed in the centre of the fountain but, unlike today, she was on the same level as the other sculptures, on a little stone island decorated with reeds and rocks. And she was facing the Palace. 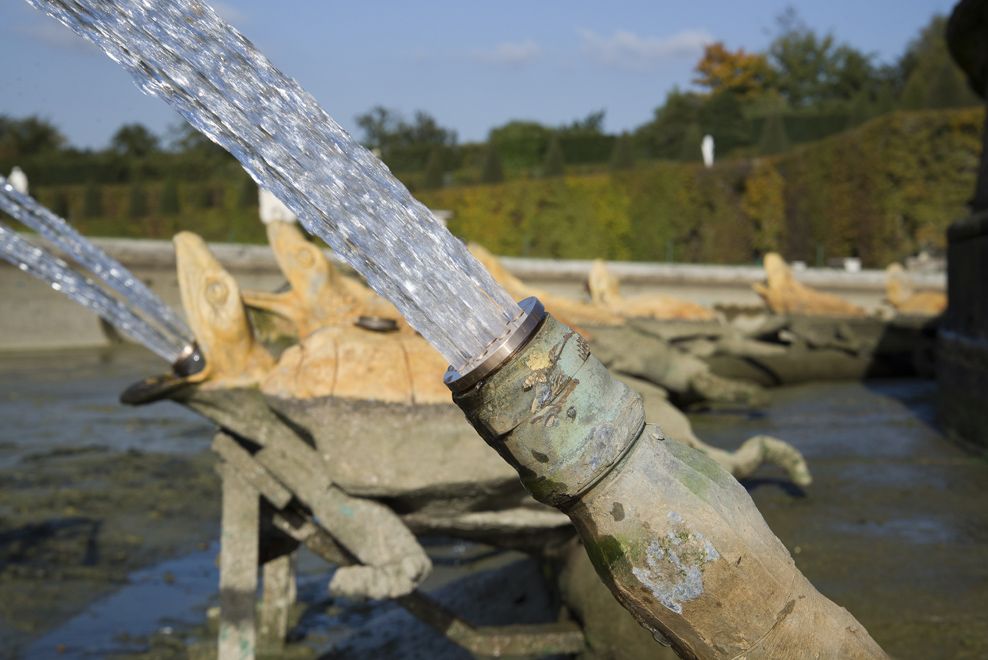 In two years, from 1687 to 1689, Jules Hardouin-Mansart (1646 - 1708) considerably modified the composition by turning Latona towards the Grand Perspective and raising her above the other figures. Installed on a marble pyramid with four tiers, Latona then turned her back on the Palace and looked towards the horizon. As the two Marsy brothers had died, Hardouin-Mansart commissioned some new animal figures from the sculptor Claude Bertin (1653 - 1705).

The figures of lizards and turtles are placed at ground level in the fountain. Peasants undergoing metamorphosis and frogs are placed on the first tier of the pyramid. The next two tiers feature frogs. Lastly, on the summit, the bright marble statue of Latona dominates this aquatic fauna cast in gilded lead. 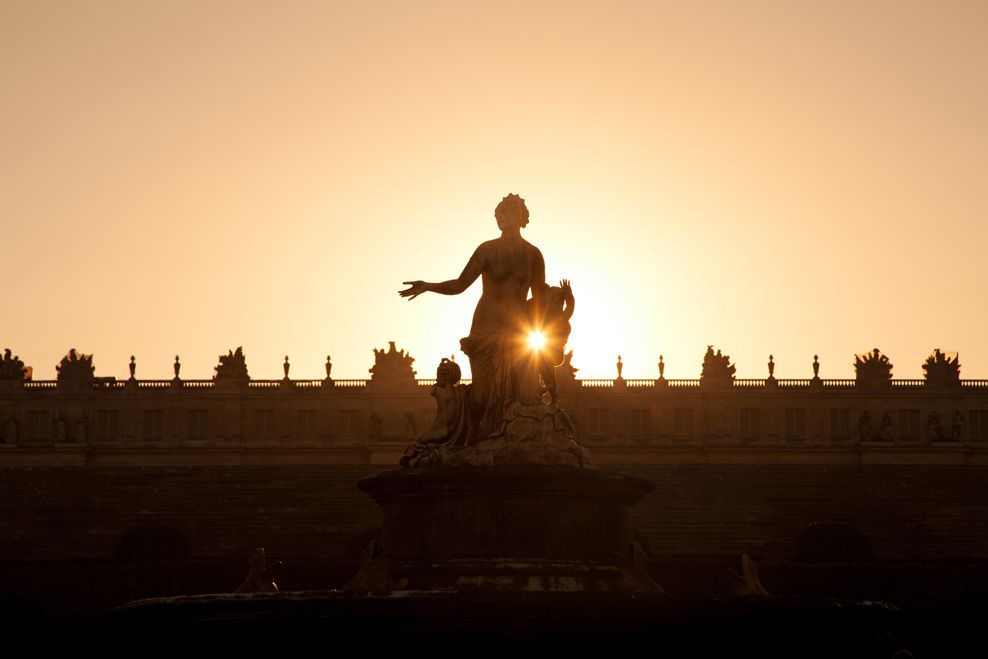 A hymn to the glory of the Sun King © EPV / Thomas Garnier
A song to the glory of the Sun King
Some historians have interpreted the Latona fountain as an allegory of the victory of Louis XIV over the Fronde, the rebellion of the nobles against the power of the monarchy during the childhood of Louis XIV. Latona, the mother of Apollo, represents Anne of Austria, the mother of Louis XIV and regent during the Fronde. The metamorphosis of the peasants into frogs illustrates the punishment reserved to those who dare to rebel against the royal authority. However, no trace of this interpretation can be found in any author or document of the period. Moreover, the iconography in Versailles that Louis XIV wanted never made any reference to his family.
The Latona fountain sings the combined glory of Louis XIV and his emblem the sun, embodied in the figure of Apollo. To establish this identification, the Sun King commissioned sculptors to illustrate in his garden several episodes from the life of the sun god. The Latona fountain evokes his childhood. Apollo’s Chariot, emerging from its fountain like the sun from the ocean, symbolises the dawning of the day and the levee of the king. The Apollo’s Bath grove, whose statues were originally in the Thetys Grotto, represents the nightly rest of the sun in the ocean. The series forms a solar symphony whose true hero is no other than the king who commissioned them, Louis XIV.