Home > The Latona fountain > THE LEGEND OF LATONA

THE LEGEND OF LATONA

​​
​The rivalry between Latona and Juno
Latona, known as Leto in Greek mythology, was the daughter of the Titan couple Coeus and Phoebe. She became the mistress of Jupiter and conceived two children by him, Diana and Apollo.
When she discovered this pregnancy, Juno, Jupiter’s wife, was filled with fury. She decreed exile from the universe for her rival, forbidding any land from accepting her to give birth there. Condemned to perpetual flight, Latona began an endless wandering across the Earth, before managing to find a temporary refuge on the island of Delos where she gave birth to Apollo and Diana.
Her two twins had hardly seen the light of day when Latona had to flee once again to escape from the fury of Juno. Her wanderings took her to the border of Lycia, and it was here that the episode occurred which is illustrated in the garden of Versailles. 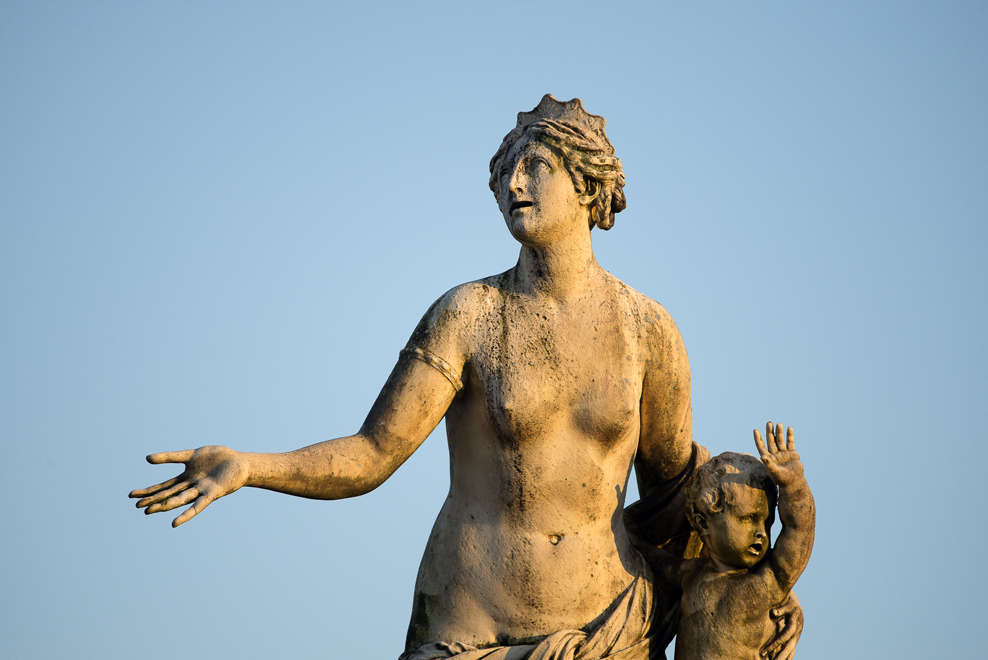 The sun setting on Latona © EPV / Thomas Garnier
The encounter between Latona and the peasants of Lycia
During her wanderings, Latona one day reached Lycia, a region in Asia Minor located in present-day southern Turkey. Exhausted and parched, she decided to halt and saw down in a valley a pond around which peasants were busy gathering rushes and algae. Attracted by its clear water, she went to drink from it. But the peasants objected and forbade her from drinking from the pond. Surprised, Latona tried to appease then by saying:
“Why do you forbid me this water? Water belongs to everyone. Good and wise nature made for all of us the air, the light and the waters. I only want to use what is every person’s right but here I have to beg you for it as if it was a favour. I do not intend to wash my exhausted body but only to quench my thirst. My mouth is dry and I can hardly talk. This water will be like nectar for me; let me drink it and I will owe you my life. Oh! Let yourselves be moved by these two children at my breast who reach out their feeble arms to you.”
Unmoved by these supplications, the peasants persisted in their refusal. They ordered Latona to leave the place and, to make sure she could not drink, they rushed into the pond where they trampled on the bed with their feet and churned up the water with their arms, so that the pond water was soon filthy with mud. 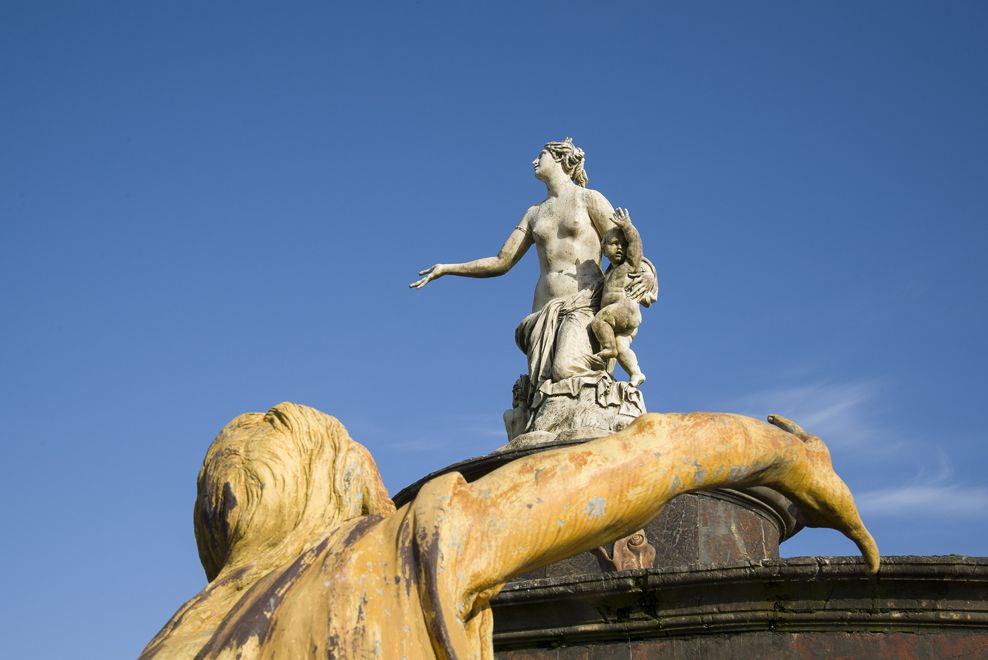 A peasant gazing at Latona and her children © EPV / Thomas Garnier
The anger of Latona and the metamorphosis
Enraged, Latona forgot her thirst, raised her hands to the sky and cried out: “May you live forever in the slime of your pond!” Her curse took effect immediately and the metamorphosis began.
As if driven mad, all the peasants dived into the pool, emerged and dived in again, swimming to the bottom and back up to the surface, showing their heads above the water before disappearing under it again. They continued to shout abuse at Latona and even under the water their insults could still be heard. But already their voices had changed, their throats swelled and their mouths widened, their heads shrunk into their shoulders, their backs turned green and their bellies grew round and white. After becoming frogs, the peasants of Lycia were to live forever like this in the slime of their pond, fulfilling the curse of Latona. 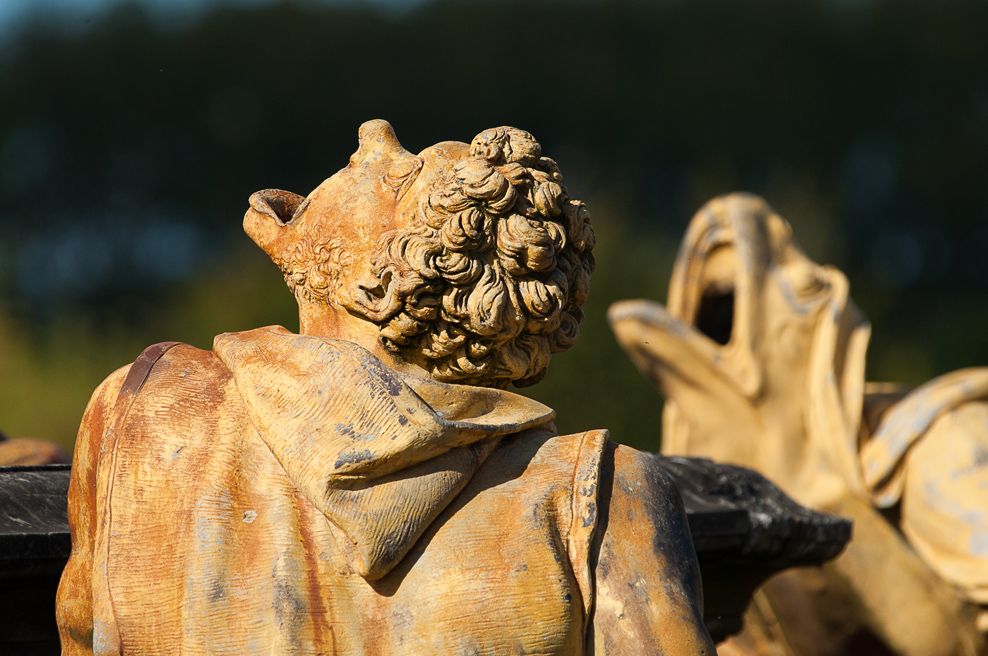 The metamorphosis of the peasants © EPV / Thomas Garnier
The representation of this episode in the garden of Versailles
This episode of the encounter between Latona and the peasants of Lycia is depicted in the Latona fountain in the centre of the garden of Versailles.
At the top is the white marble sculpture group. The two children, Apollo and Diana, hold out their arms to beg the peasants. Latona already has her eyes raised to the sky and her open mouth suggests the curse she is uttering against the peasants. The brilliance of the marble group offers a striking contrast with the gilt lead figures installed on the lower tiers.
Half-human and half-frog, six peasants are undergoing their metamorphosis. Some have kept their human appearance almost intact. Others have nearly completed their transformation: their mouths are wide and round, and their hands have been transformed into flippers. The water that they spout evokes the insults they shouted at Latona and which led to their metamorphosis. 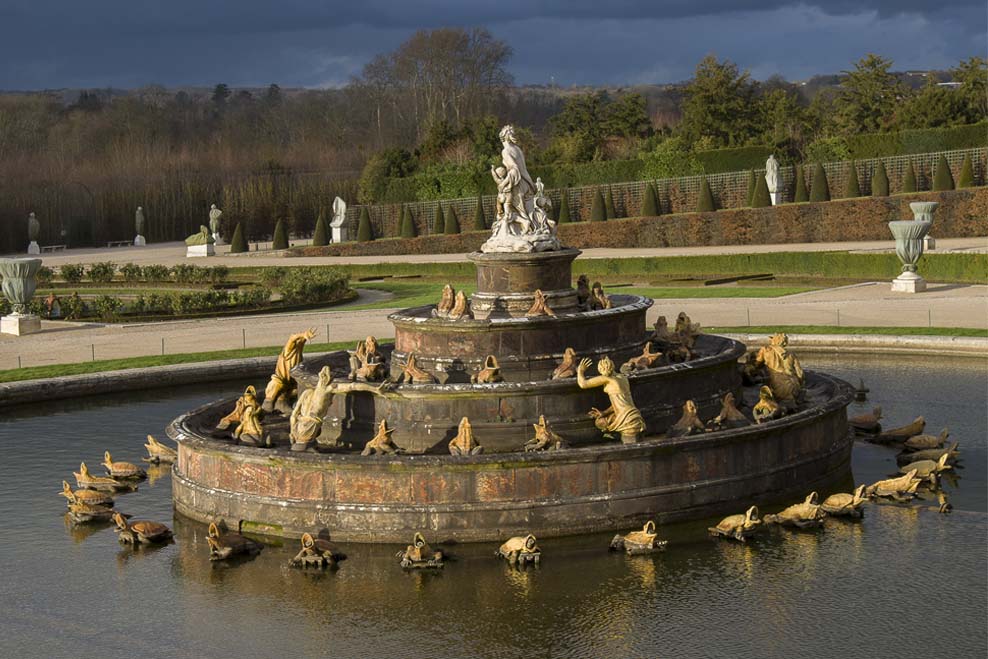 A stormy sky over the Latona fountain © EPV / Thomas Garnier