Encouraging philanthropic commitment
Two hundred years of civic-minded commitment have taught the Lombard Odier bank that giving is an art as marvellous as it is demanding. In order to share with its clients this long philanthropic tradition and to allow them to benefit from the experience and expertise acquired over the years, Lombard Odier has developed a consultancy service in philanthropy. The bank accompanies its clients by helping them to draw up donation strategies that correspond to their aspirations and to choose the donation method that suits them.
It is in the framework of this counselling service in philanthropy that Lombard Odier set up the Fondation Philanthropia. Like the Fondation de France, Philanthropia is a hosting foundation that enables donors to undertake a commitment in two ways:
1. Either by funding projects bringing together several donors in a “Thematic Fund”.
2. Or by setting up their own personalized fund, known as a “Hosted Fund”.
This simplifies the administrative procedures and pools the structural costs. It also facilitates the sharing of experience and thus maximises the effectiveness and the impact of donations. Backed by an establishment over two hundred years old, the Fondation Philanthropia also guarantees donors that their philanthropic commitments will endure and that their wishes will be complied with by successive generations. 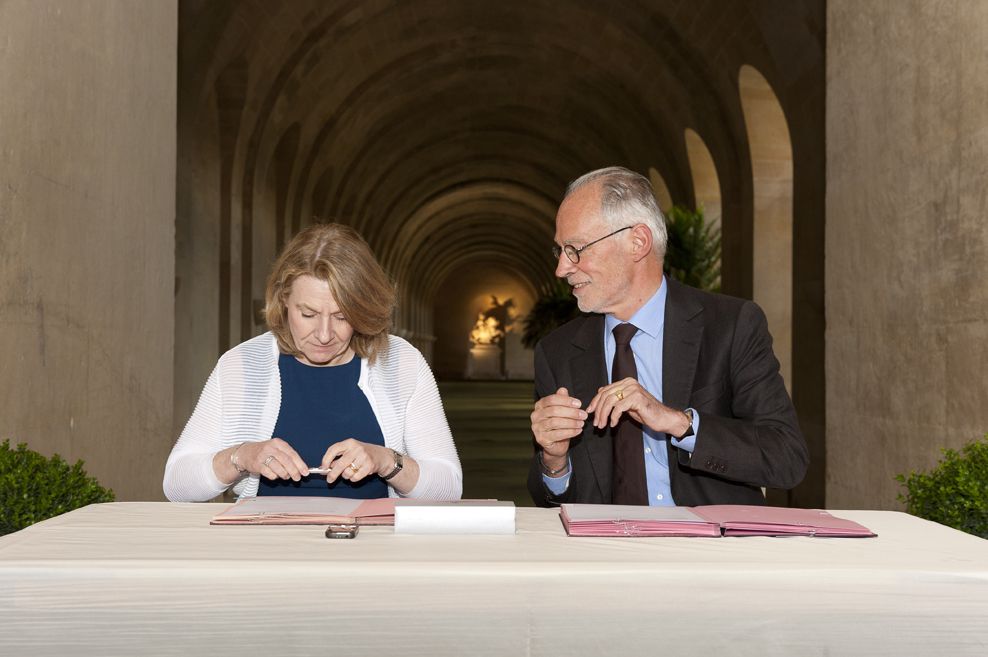 Catherine Pégard and Thierry Lombard signing the donation agreement in the Orangerie © EPV / Thomas Garnier
The Fondation Philanthropia covers all the philanthropic fields, divided into four categories: Humanitarian and social action (47% of thematic donations in 2012), culture and education (37%), medical and scientific research (10%), the environment and sustainable development (6%).
An illustration of its activity is the “Humanitarian and Social Action” Thematic Fund which committed in 2012 to support the action of SOS Sahel to reinforce their actions toward the food crisis and this desertification affecting this region of Africa. Another example is the “Medical and Scientific Research” Thematic Fund which gave support to the Institut Pasteur in developing a therapeutic vaccination against cancer.
In parallel, fifteen Hosted Funds are continuing their action in the fields chosen by the donors, such as providing support to a global campaign against endangered species trafficking or granting university scholarships to students of the Medical Faculty of Geneva University.
Since it was set up in 2008, the Fondation Philanthropia has committed itself to over 17 million Swiss francs of donations that benefit around fifty organisations.
Fondation Philanthropia www.lombardodier.com